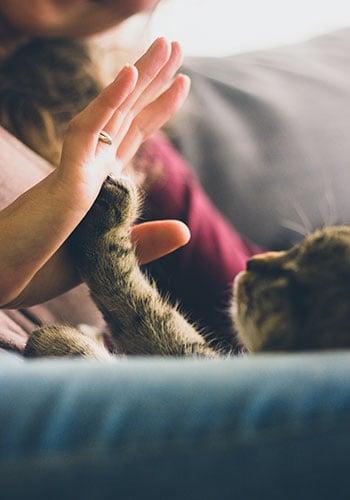 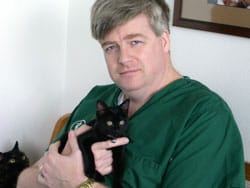 Craig A. Smith was born in the early 1960’s in the state of Iowa. The Boeing company beckoned, and the entire family of 6 soon settled in the Puget Sound region, where two more children were born. Craig and his siblings all attended various public schools in the Seattle and Shoreline districts over the years, and he graduated from Shorewood High in the late 1970’s.

Dr. Smith’s professional career began among the horses, goats, and cattle of southern Pierce County and lasted long enough for his wife and him to establish a home near Spanaway. When the housing developments finally eliminated enough open land, he obtained a position as an associate veterinarian at The Pet Doctor in Lakewood. This became a defining moment for him, as he recognized a compelling interest he had never before experienced in all his associations with various animal species: cats are amazing and exciting patients. Within three years, Dr. Smith was committed to focusing his career on providing veterinary care exclusively for cats, and opened Tacoma Cat Hospital in the fall of 1993.

Craig and his family still reside near Spanaway, and he divides his time between the Cat Hospital, raising his two sons, his church, and The Boy Scouts of America. His fervent desire as a Cat Doctor is to help people enjoy fulfilling relationships with their feline pets and provide a source for honest and compassionate advice on how to best care for them. 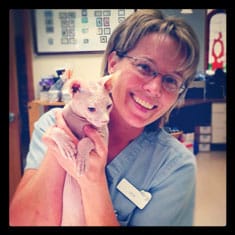 Jen graduated from the Veterinary Technology program at Pierce College in 1991. After graduation she worked at the Pet Doctor for a 2 1/2 years. Having always been very interested in cats, and working in a cats only hospital, she agreed to come with Dr. Smith when he opened the Tacoma Cat Hospital in 1993. She’s been here ever since! Jen loves working in s cats only environment, as she enjoys cats, their unique personalities and helping their owners take care of their cats.

Jen and her family enjoy riding quads on the Oregon coast sand dunes. They go as often as possible. If she’s ever not at work, you can bet that’s where she is! She also raises and shows bantam chickens and call ducks. She shares her home with dogs and cats and the yard with various feathered friends and a beehive or two.

Elizabeth is a 1985 graduate of the Animal Science department of Washington State University, and earned her veterinary technician license in 1989. She has been employed in the animal care field since her college graduation in a variety of public and private institutions. Her husband and two children care for 3 cats, 1 rat, and a gecko. 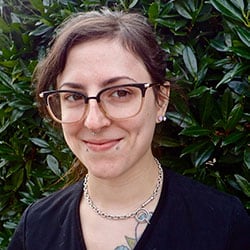 Erin has been a devoted cat caretaker her entire life, growing up with no fewer than 4 cats at a time. She has worked with animals over the past decade as a shelter worker, kitten foster, pet sitter, and veterinary assistant.

Erin is a Washington State transplant, originally from central New York, and has lived in Tacoma for the past 3 years with her boyfriend and 3 cats. When not at work she enjoys hiking, yoga, and drawing.

Laura worked as a receptionist for 12 years at The Pet Doctor and another 12 years for Sherwin-Williams Co. before returning to the veterinary field at Tacoma Cat Hospital in January 2013. She is extremely happy to be back in the animal world! 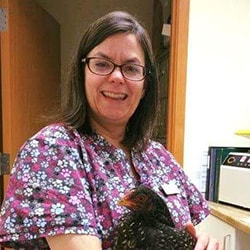 Missy is a native Washingtonian who grew up in the Lacey area.  Her main responsibility at at Tacoma Cat Hospital is taking care of our boarding cats.  Her favorite parts of the job include getting to know the cats and their owners and also working as a team with an extraordinary crew of caring, compassionate and knowledgeable staff.

When not spending time with the kitties in Boarding, Missy enjoys being with her family, listening to music, reading, and hanging out with friends.  She lives in Lakewood with her husband, three children, and three fur babies.